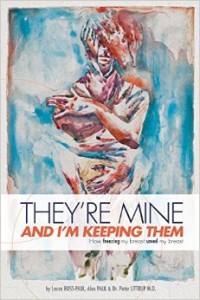 They’re Mine and I’m Keeping Them: or, How Freezing My Breast Saved My Breast

They’re Mine and I’m Keeping Them is a story of innovation, courage, and triumph. Laura Ross-Paul wanted to keep her breast after being diagnosed with breast cancer and facing a mastectomy as her only medical option. This is the story of how she and her husband bucked the system, found Dr. Peter Littrup, a doctor with advanced skill in the field of tumor freezing, who performed cryo-ablation, and ultimately saved her breast. The success of their collaboration makes breast conservation a realistic outcome of breast cancer treatment. An unexpected, but welcome result, of the cryo-ablation treatment, was the “immune effect.” The body’s immune system is able to recognize the protein structure of the cancer cells when it cleans out the dead tissue and in about half the cases of cryo-ablation, naturally creates an immunity to the cancer. The book also relates the success at FUDA Hospital in Guangzhou, China in treating a variety of Stage 4 cancers by combining cryo-ablation and advanced immune system therapies, which increase the frequency of the occurrence of the natural immune effect to approximately eighty percent or higher of the cases.