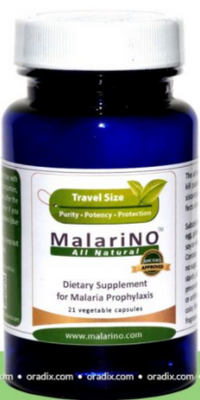 Early treatment studies (pooled effects) show the superiority of Nigella Sativa (Cumin), found in MalariNO over the studied active ingredients, based on real-time analysis of 1,099 studies[1]:

The emergence of Plasmodium falciparum resistance to artemisinin is an urgent public health concern, threatening the sustainability of the ongoing global effort to reduce the burden of malaria.

Action: Keep your MalariNO bottle nearby – Here is why (click here)!

The emergence of Plasmodium falciparum resistance to artemisinin is an urgent public health concern, threatening the sustainability of the ongoing global effort to reduce the burden of malaria. To date, parasite resistance has been documented in three of the five malaria species known to affect humans: P. falciparum, P. vivax and P. malariae. MalariNO™ gives hope where others fail, where drug-resistance is an emerging or recurring concern, most recently in Africa.

The microscopic parasites of both malaria and Babesia infect red blood cells. Chronic Lyme patients reported success in using MalariNO™ when they used it to control their Babesiosis. Babesia microti is the most common in the United States.

Traditional use of herbal medicine is well documented in many communities and countries. In fact, most anti-malarial drugs evolved from a herb extract. Even today, it is possible to buy traditional anti-malarial herbs or natural products at the local markets in most malaria-endemic countries. What these products lack is standardization, quality tests, and efficiency, and precise instructions about how to take them. Furthermore, they also lack the benefit from having access to anti-malarial herbs, that were tested and documented to have high level of effectiveness in other part of the world.

MalariNO™ overcomes these limitations and was formulated with the goal to provide malaria prophylaxis (and more) with its powerful natural ingredients. After a careful review of medical studies, for the first time the most beneficial, regionally tested and true, traditional anti-malarial herbs are represented in MalariNO that resulted in the most powerful herbal, synergistic natural product.

The global herbal synergy provides the most solid foundation for the avoidance of the development of resistance towards malaria. There is general agreement that a new anti-malarial should ideally meet the following criteria:

The proprietary mix of clinically tested herbs is sourced from Asia, Africa, and South America.

Do not use if the safety seal is broken or missing. Keep out of reach of children. Store in a cool, dry place.