Cryosurgery, also called cryotherapy or cryoablation is a technique new to breast cancer treatment that I hope will become the worldwide standard of care. 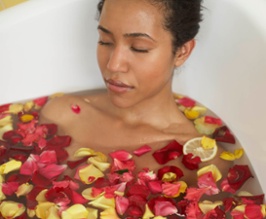 I was fortunate enough to work with two women who had this procedure done by Dr. Peter Littrup, an interventional radiologist who gained FDA approval for a device he invented and used to freeze prostate cancer tumors using liquid nitrogen.

Mary L. is a patient who refused standard surgery, radiation and chemotherapy for breast cancer, and instead chose cryoablation by Dr. Littrup in 2010. View her thermography scan, conducted by me, prior to her cryoablation treatment. Here’s her story:

Mary was diagnosed with infiltrating ductal Stage II carcinoma, and had a 2 cm x 2 cm tumor in her left breast with dimpling at 12:00. Mary had a very abnormal thermogram with a 2 degree Celsius Delta thermal shift over the mass and blood flow leading to the tumor. The red circle, highlighted by the white arrow, surrounds the region of the tumor.

Mary returned 8 months post-cryo and the large/spongy mass was 4 cm x 6.5 cm. (Before, the hard mass had been 2 cm x 2 cm.) There was no thermal activity over the soft mass, and the blood vessels that were observed on infrared 3 months prior to her cryotherapy were now absent.

I was initially alarmed by the size of the soft spongy mass, but Dr. Littrup told me that this was common after cryotherapy due to the “immune effect” – which occurs about 85% of the time. This is the process where the immune system is able to recognize the protein structure of the cancer cells, and the body sends out white blood cells and cytokines to clean out the dead tissue frozen by the liquid nitrogen. In this way, the body naturally creates immunity to the cancer.

It’s important to NEVER surgically disturb or needle biopsy the spongy area, which is comprised of dead tissue and white cells. A biopsy will interfere with the body’s immune system process and may cause a life threatening infection.

Dr. Littrup confirmed that the spongy mass shrinks about 80% in size leaving a small bit of scar tissue.

In addition to being used for breast cancer treatment, cryotherapy is also used to treat breast fibroadenomas (instead of cutting them out), to destroy precancerous skin moles and to eliminate cervical abnormalities.

With the improvement of imaging techniques and the development of devices with better temperature control, physicians are now using cryotherapy as a treatment for patients with other forms of cancer, like liver and pancreatic cancer.

For those who are interested in additional detail, here is an overview of cryoablation taken from the book They’re Mine And I’m Keeping Them:

In a 30-minute office procedure, local anesthesia is first administered. Then cryoprobes are inserted, guided by ultrasound, and cells are frozen. Afterward, the patient may take 2 Tylenol and go back to work. Many say the procedure is less uncomfortable than a core biopsy.

Cancer survives in the body by camouflaging itself from the immune system. After a tumor is frozen, the body absorbs the dead tissue. The protein structure of the tumor remains intact after freezing, so the immune system can “see” the cancer and recognize that it is a “foreign body.” When it does, this triggers a complex immune process that often builds antibodies to the cancer.  These antibodies then kill other tumors throughout the body.

Cryosurgery is a Win-Win for Women

Cryotherapy is a big win for breast cancer patients because it conserves the breast, eliminates the need for surgery and kills the cancer. Remarkably, it also kills satellite breast cancers (in other regions and lymph nodes) 85% of the time as part of the “immune effect.”

My case study slides of Mary L. were presented to 400 researchers at the 5th International Cryoablation Conference, which was held outside Beijing in July 2016. Laura Ross-Paul, author of the book They’re Mine And I’m Keeping Them, delivered this presentation.

I’ve had the pleasure of collaborating with Laura Ross-Paul, a breast cancer survivor who received her cryotherapy treatment from Dr. Littrup in 2003. Laura, who calls herself a “patient pioneer,” was the first woman to receive Dr. Littrup’s cryoablation as the primary treatment for multi-focused breast cancer.

Her book was co-authored with her husband, Alex Paul, and Dr. Peter Littrup. It documents the story of how she and her husband bucked the system and ultimately saved her from disfiguring cancer treatment.

Ingrid has been in practice for 35 years as a nationally certified Family Nurse Practitioner  with an additional  Masters in Health Education. She has become a thought leader in the prevention of breast cancer and effects of toxic exposure to herbicides/pesticides/bovine growth hormones resulting in abnormal Thermography scans. She is president and author of Proactive Breast Wellness, a comprehensive, empowering program to assist women in reducing breast cancer risk or its reoccurrence. Learn more at www.proactivebreastwellness.com.